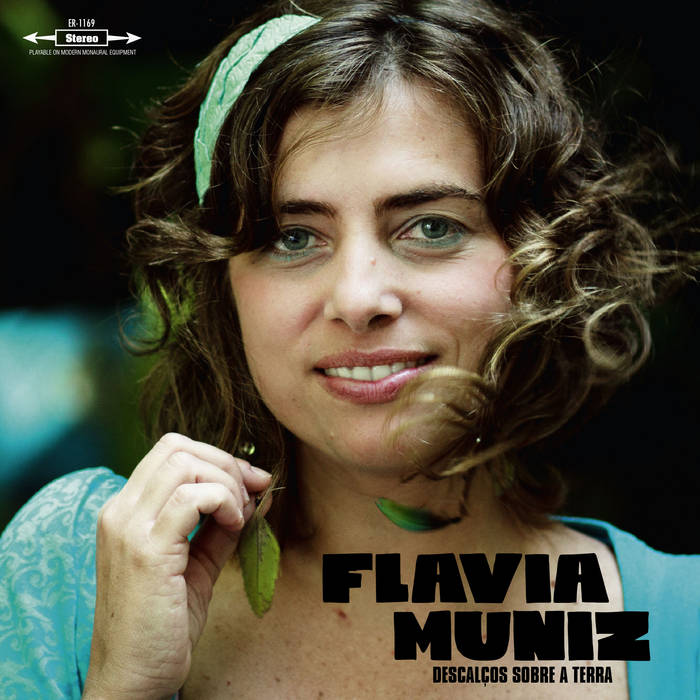 Once again showing our passion for all the imaginable ways of understanding pop and also for Brazilian music, Elefant Records is releasing the debut album of one of Brazil’s most promising artists, Flávia Muniz. She is one of those characters who breathes life into everything around her; when you know about her life and you know her, it confirms the beauty that her songs transmit even more, if that’s even possible. Her first album, “Descalços Sobre A Terra”, is a marvelous and clear example of Música Popular Brasileña, rich in rhythms, harmonies, and arrangements, which pays its debt to the great classics of Rio.

Born in 1976, she got her degree in Unirio in Música Popular Brasileña, where she developed her music under teachers like Luis Otávio Braga,Roberto Gnattali,Rick Ventura,Avelino Romero,Maria Haro andMirna Rubin. In 2007, she was in a coma from which she emerged unharmed, but which forced her to “relearn how to breathe, to speak, to walk, to eat, and to sing”, as she herself says. A nature lover and always inspired by nature, she got her strength back by writing books (“Quero ver verdejar”, “Vilarejo”, “Bárbara e a baleia”, “A história da menina que chorava letras”, “Joana e Altamira”, “Menino, grande menino” and “Verde Maduro”) which garner a certain amount of acclaim and are even held as examples for children’s activities. The other thing that helped her recover was continuing to work with her Brazilian indie-pop band, LUISA MANDOU UM BEIJO. She recorded three albums with them as the lead singer, even writing many of the songs, but she slowly began to surround herself with other musicians who connected to her life philosophy. This gave way to the band with which she released her first album. O OLHO MÁGICO - Bruno Reis(Brazilian guitar), Felipe Rodrigues (guitar), Rodrigo Sebastian (double bass), Rômulo Frazão (flute) y Thiago Kobe (drums) – have been key figures in the recording process of “Descalços Sobre A Terra”, which was done in an absolutely acoustic format that connects Brazilian tradition and roots to samba and bossa, and even to pop music.

The album is light and colorful as few that have come out in recent years, and it’s easy to see Flávia’s exquisite musical training, mixed with classical styles, the strength of Elis Regina, the elegance of Gal Costa, the amazing imagination of tropicalism and the unbridled creativity of Caetano Veloso, the cheerfulness of Evinha, and the universal qualities of Vinicius de Moraes. “Brasil Onde A Gente Mora” is a trip with theQUARTETO EM CY to Veloso’s “Estrangeiro”, with a chorus that in and of itself is like a hymn, and it’s an absolutely incredible opening track for the album. “Catavento” has a complex instrumentation that wouldn’t have sounded out of place at all on the album that defined tropicalism. “Cocorocô” is another of the album’s greatest gems, and it has the vivacious ability to make a rainbow out of every note, like Toquinho and Baden Pow did in their most samba-heavy eras. With that typical Brazilian ability to jump from one language to another, “Comment Tu T'appelles” switches from French to Ingles and back to Portuguese as if it were a children’s game. “Mãe D'água” and “Tamuia” return to samba with rich poetry and rhythms, with the class of Nara Leao and the performative power of Marisa Monte. “Rebujo De Igarapé” builds a bridge from the Bahia to the Adriatic Sea. “To Viva Na Terra” proves that reggae went through Brazil on its way to Jamaica, and once again shows Flávia Muniz’s passion for life – strong and powerful, delicious and delicate. “Festa Em Aruanda” lets Brazil’s popular roots grow again through the great female voices of the Brazilian samba. “Raízes Brasileiras” is the song that explains it all, the music and where it came from, with musical origins that are unique in all the world, and exuberantly rich, like when she says, “Que esa esencia brasileña me explote como un río (…) La cultura es un caldo de ebullición, suma de especias” (Let this Brazilian essence run through me like a river… The culture is a boiling pot, a sum of spices). And the album closes with that “Tengo Suerte”, which is 100% homage, somewhere between the Charleston and a memory from Bizet’s “Carmen” and that line, “Tengo suerte. Yo vivo mi vida cantando” (I’m lucky. I live my life singing).

The album is full of personality, a great homage to the roots of Brazilian music, to the country’s classics, sifted through Flávia Muniz’s palette with joy, letting it soak in other, diverse influences, but above all it has that sing-songy voice that is slippery and playful, so typical of her and so delicious. She is releasing her first and wonderful album on Elefant Records, but, since it couldn’t be any other way, with her heart looking towards Rio.

Bandcamp Daily  your guide to the world of Bandcamp